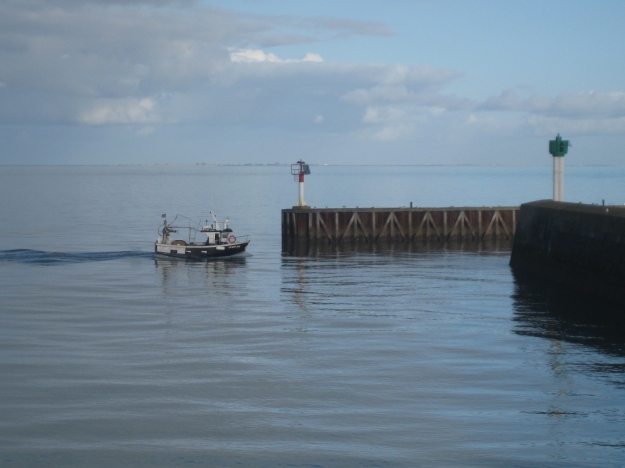 I am always pleased when I time my daily walk round the harbour in St Martin de Ré just right and one of the small boats that fish from the Ile de Ré  is coming in complete with catch.  A previous blog post higlighted Jemapa.  This time it’s an even smaller craft, the P’tit Jules. 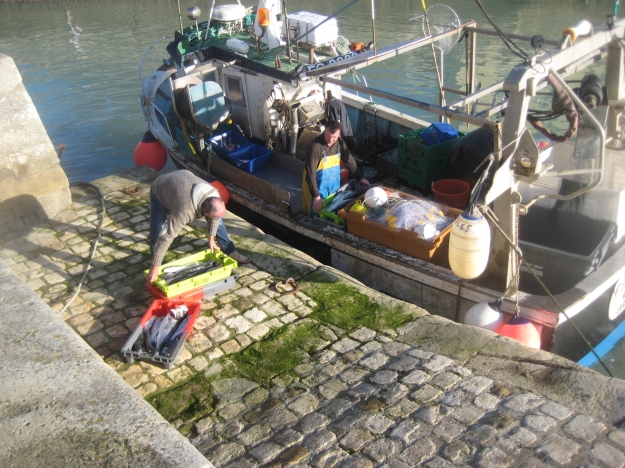 You can be staring out to sea and then you realise that little dot getting ever closer is one of the last petit bateau as they are called here.  In this case, the boat owned and operated by Hugues Moinard.  That’s him in his blue and yellow fisherman’s gear.

It takes only a few minutes to land the day’s catch and then load it into the white van that’s been waiting for the boat to come in.  In fact the arrival of a van quayside is often a sure fire sign that a boat is due.  The driver is thrown the P’tit Jules’s ropes so she can moor safely and then the fish is removed ready for market or sometimes to be delivered straight to an island restaurant.

Life as a small boat fisherman isn’t easy.  Hugues is frequently setting sail before first light and getting back into harbour well past lunchtime. The P’tit Jules is one of a dieing breed. In the 1960’s there were some 150 island fishing boats.  Now they are down to single figures.  If you want to taste some of  the fish caught by Hugo le Pêcheur  that’s easy.  Part of the catch regularly makes it the few metres from the quay into the kitchen of L’Avantport restaurant in St Martin de Ré.  You can walk to the restaurant from our house. Click here to rent our holiday home.